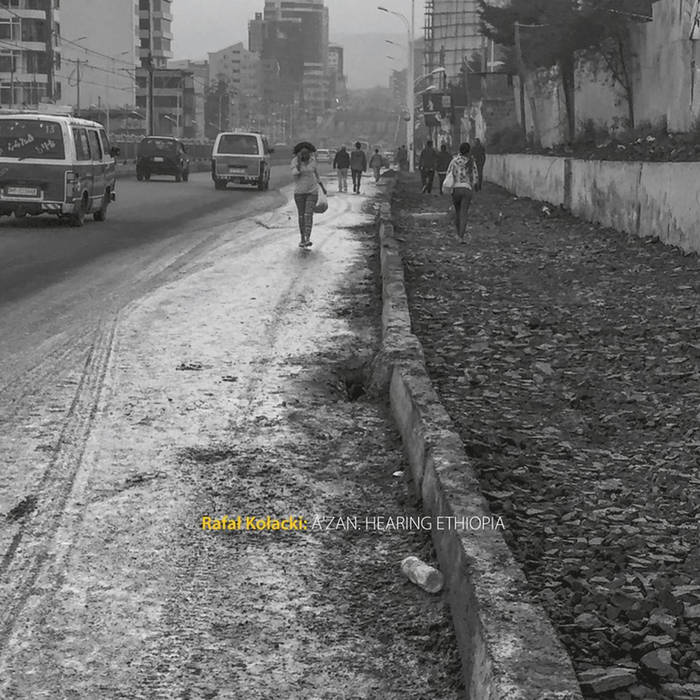 antonaidh Having lived in Addis, I love the composer's minimalist intervention approach to the collection of sounds. I love listening to this!

Rafał Kołacki's new album entitled 'Ā'zan. Hearing Ethiopia' is another set of field recordings of this artist in which he aims at an in-depth analysis of the audiosphere of a big city. This time of Addis Abeba, the capital of Ethiopia, the place with an extremely wide range of sounds. A multicultural city, both ethnically and religiously, where there are many different languages and different forms of religious activity. The voice of Muezzin praying in the distance, the Christian songs sung in the church or played through loudspeakers throughout the day. It all remind us of the openness and tolerance of the Ethiopians, their ability to function in mutual symbiosis, beyond religion and politics.

As Kołacki says: the Ethiopians are a very proud nation, also of their sonic culture. They cultivate their musical traditions at various levels. Therefore, music known from the charts is not encountered here, they primarily listen to Ethiopian performers (of pop music) or sacred music. Although the quality of these recordings leaves a lot to be desired (the most popular medium is the mobile phone), most of the songs are memorized and sung together. The Ethiopians love to have fun, so all kinds of holidays are a special time for them. At one of the most important festivities called Meskal (commemorating the discovery of the True Cross in 326 by Helena the Empress), the whole city participates in a collective madness and its streets transform into the arena for large parades or small spontaneous concerts.

This time, Kołacki approached the substantive content of the album slightly differently than in his previous productions. Instead of the short audio snippets of individual places like on 'Hijra. Noise from The Jungle', he proposes to the listener an in-depth contemplation for a few minutes in the landmarks of the Ethiopian capital. These include St. Mary Church which is a very popular place for daily prayers and spiritual contemplation for the inhabitants of Addis Abeba. It runs almost continuously from early morning till late evening, open to everyone, having a large courtyard with the proper temple in the centre. Here one can reflect and pray in silence. During the day, the speakers outside play religious music. Around the church, outside the courtyard the only noise audible is that of a very busy King George street. Washa Mikael Rock Hewn Church to where it takes a day trip out of the city, upwards and into the forest, to the bosom of nature. The church is located on a picturesque hillside. In the same area, there is another, younger contemporary church and several farm buildings. Washa Mikael is carved in rocks and no longer has the primary function, it is a monument, a symbol of past years. Throughout the building complex a more active role is played by a regularly functioning chapel, where different types of religious ceremonies take place. It is a mystical experience for the nearby inhabitants to climb the summit and to participate in such a ritual. The sounds of rituals coming from the centre of the church are heard. This is something amazing; meditative, mantra-like murmuring intertwined by the use of sacred instruments (sistrum, bells). The recording was made in the morning.

In general, the twelve tracks comprising the album have all the titles written in a traditional Ethiopian language called ge'ez - now liturgical. It has interesting phonetics and forms of writing, for example, the title itself Ā'zan in ge'ez means "ears."